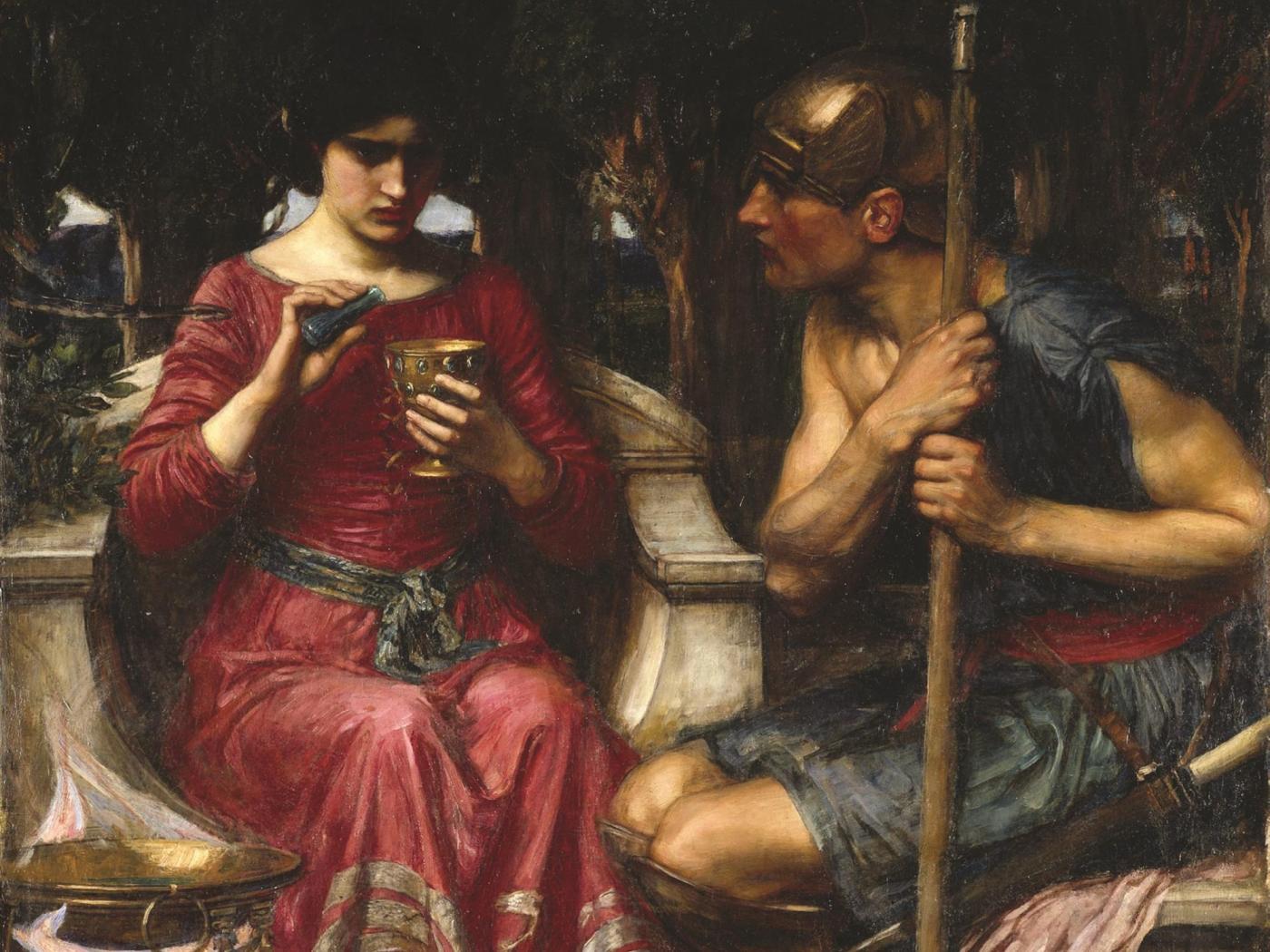 Medea, a tragedy written by Euripides in 431 BCE, is based on the myth of Jason and Medea. Jason and his Argonauts journeyed to Colchis, on the far side of the Black Sea, to capture the Golden Fleece in order that he reclaim the throne that was stolen from him.

In Colchis, Aphrodite puts a spell on the king’s daughter, Medea, who falls in love with Jason and uses her magic to assure his victory in obtaining the fleece. Medea flees with Jason as her father gives chase. To slow his pursuit, Medea kills her brother, and throws his limbs individually into the sea so that her father must stop to pick up all the pieces.

They return to Jason’s native Iolcus, where the king still refuses to cede the throne. Medea tricks the usurper’s daughters into killing him; Jason and Medea are consequently exiled to Corinth. Here they have settled and are raising two young boys, when Medea learns she has been betrayed.

Not from around here

The scene opens with Medea raging offstage, having just learned of Jason’s secret plan to marry King Creon’s daughter. Fearful of what Medea might do, the Chorus worries of her well-being: “Her mind is fierce, and she will not endure ill treatment.”

Depicted as the ‘other,’ Medea is a dark-skinned immigrant sorceress, a “barbarian.” The Chorus, however, says the citizens of Corinth like her. “Go tell her that we are her friends. Please hurry!,” they instruct the nurse.

Medea appears, claiming that she “wants to die.” Her hero husband is revealed to be “the worst of men.” She laments having betrayed her father, unable now to return to her homeland, and suddenly very out of place in Corinth.

Jason, the Chorus insists, is “harming those whom he should love,” and to add salt to the wound, King Creon arrives to exile her and the children, for fear of her mystical powers. This lady is fierce, and even the most powerful of men know it.

Medea is passionate, repeatedly called fierce, a terror, willful, wild. Her emotions are powerful and frightening – and so is her potential. What she is capable of keeps us on edge throughout.

Jason enters, all condescension and chauvinism, after Creon’s departure. He tells Medea she could have avoided exile “by simply acquiescing in the plans of those who are greater,” and that she is an “idiot,” who does not see that he’s looking out for her by marrying the princess. He insists that their boys would be equal to any future, royal, children, and denies her role in obtaining the Golden Fleece, regardless that she killed the dragon guarding it.

Instead, he credits the gods for his success, and tells her she got the better end of the bargain for living in Greece “instead of your barbarian land.” He invokes Greek justice and civil law. But what is justice? Who designs it, and for whom is it dispensed? Certainly not Medea. Jason tells her, “you’re willful. And you’ll suffer for it,” as if she isn’t suffering right in front of him. And thanks to him, she is famous, which she never would be “living at the edge of nowhere.”

Jason then turns misogynist: “You’re a woman – and you’re all the same,” concerned only, and frivolously, with the bedroom. “Men should really have some other method for getting children. The whole female race should not exist. It’s nothing but a nuisance.”

Medea may have been under a powerful spell when she fell in love with Jason, but what’s the princess’ excuse? Standing in her dignity in light of such abuse, Medea declines his offer of financial aid in exile, as “there is no profit in a bad man’s gift.”

For Euripides’ audience, Medea would appear a cautionary tale: Don’t be like Jason! Stick to your own “civilized” women, who don’t disrupt our hegemony. Yet the barbarian trope is inverted as Medea shows us the poison of the patriarchy inside the domestic sphere. Jason’s arrogance and cruelty create an impossible situation for Medea, and she is pushed to desperation.

Lamenting her homeland, Medea blames “that Greek man” for her troubles. That “civilized” Greek man is made “other,” not even worthy of being named. But she is not satisfied with simply denying him his name, and she does not bear these insults lightly.

Medea rails against patriarchal double standards, not least of all the hypocrisy of marriage, that civilized institution. That women spend vast amounts of money “just to get a master for our body,” without guarantee of what kind of man he will be. That she must navigate the new world of her husband’s home and preferences, woe to her who disappoints. That she cannot leave a bad marriage with her reputation intact, and she cannot exist socially outside the home. That men have friends, but “we must rely on just one single soul.”

Eurpides’ audience would surely be shocked by Medea’s “masculine” behaviours. But to a modern reader, her qualities are admirable – if dispensed on unadmirable activities. She does, after all, display a strategic propensity for murder.

And now, banished from Corinth and Colchis, represented by Jason and her father respectively, Medea must chart her own course in the world. This is a great deviation from womens’ proscribed role in Jason’s Greece.

Having secured a day’s grace from Creon before entering exile, Medea resolves a cunning plan, insisting that “my enemies will pay what justice demands.” She arranges safe harbour in Athens, whose King conveniently needs some of her magic and agrees to protect her. And then, she steels herself for what is to come: “I have the utmost nerve.”

First, convinces Jason that she was merely being hysterical and childish, woman as she is. She wants him to be happy, and to give the princess a gift that their boys might not be exiled. Pleased with this new, sensible Medea, he brings their children to the princess to deliver a golden cloak and coronet. Tragically for her, they are poison-laced, and cause her flesh to melt upon donning them. A devastated King Creon attempts to comfort her, and, having touched the poison, meets the same end.

One could read it as a comment on the “poison” of vanity and status, the flimsiness of the “civilized” façade, the ease with which false things can be taken away. But worse is still to follow.

“Oh god,” Medea says, on hearing the result of this plan. “Oh god, oh god.” It is the point of no return: as the messengers of the poisoned goods, her children are now marked for death. But rather than leave them to the cruelty of the kingdom, she resolves to slay them herself: more’s the pain for Jason. Yet she grapples with this, and wavers. She loves them. She grieves them. She kisses them and blesses them. She had “so much hope when you were born.” But her hope has died, and so they must with it.

The Chorus, who first begged Medea not to kill the boys, now laments that grief which fortune had bestowed on Jason, “as justice has demanded.” This legendary hero is now the patsy, the powerless victim of forces greater than himself, forces he thought he could oppress by his will. He arrives from the discovery of his dead bride and her father, now to find his dead boys at their mother’s hand.

The scene is horrific, devastating. It is the slaughter of innocents, scapegoats sacrificed to avenge a betrayal. Medea has done the unthinkable. “No Greek woman would have the nerve to do this, but I married you instead,” Jason cries. Yet she had consistently been painted in a corner: barbarian, other, willful. Perhaps if she had been accepted in Corinth as equally human to her Greek counterparts, and indeed her male ones, the outcome could have been different.

Some sensitivity from Jason might have gone a long way as well.

The disempowered are sometimes driven to do desperate things. But Medea refuses to abdicate her agency or humanity (or monstrosity), even as she is increasingly minimized by the men making decisions around her. She takes ultimate power by maiming and killing those men, and the boys who would grow up to replace them. She violently rejects patriarchal oppression, with no option to do so “civilly.” It is no fault of Medea’s for being powerful; but there is fault in others for attempting to oppress her.

That she escapes in Helios’ chariot suggests that she has the gods on her side. She is vindicated and escapes moral consequence.

Most of us don’t get such a dramatic exit, and hopefully need not resort to violence, although the patriarchy continues to define western society. We should pause to consider where we oppress “others” today, and whether we create impossible situations that lead to desperate actions that might otherwise be avoided. Allowing individuals to flourish as they are would surely lead to brighter outcomes.

2 thoughts on “Medea: slayer of social oppression and patriarchy”