Today we return to our review of the Huffington Post’s 100 Best Canadian Songs Ever. Toronto’s “Your Daddy Don’t Know” at #100 was a fun piece of 80s pop, but this is more like it. If we’re looking at the pantheon of Great Canadian Song, there must be a respectable degree of nostalgia and sentimentalism. “Maybe Tomorrow,” the theme to CTV’s Canadian 1979-1985 re-issue of The Littlest Hobo, was written by Terry Bush specifically for the show. 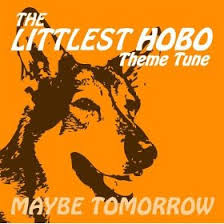 LP cover for “Maybe Tomorrow,” the Theme to The Littlest Hobo

Bush, the son of the Canadian painter Jack Bush, had become a professional musician in 1964, and worked as a jingle-writer. Approached by television producer Simon Christopher Dew about scoring a theme song for the proposed Hobo series, Bush recounts that the initial response to the song was that “everybody hated it.” The television executives recruited a New York jingle writer to compose a new theme, but unsatisfied with that result, returned to Bush in a bid to re-work the original song. In particular contrast to the original was the addition of orchestration, where Bush’s vision had been more spare.

Two decades on from the show’s initial run, Bush learned that the UK’s National Westminster Bank was using the song in its commercials. The UK had been one of Hobo‘s great export markets, so the song was familiar. It had been covered by several bands, and had become a closing-time singalong for drinkers in pubs.  In 2011 the song found renewed commercial life under the banner of Delux Paints, triggering a popularity rise that saw the song reach #1 on the iTunes and Amazon country charts in the UK.

Maybe Tomorrow found life well across the world in the southern hemisphere as well. In 2003 the New Zealand band Goldenhorse released a cover that has become a sort of summer anthem in that country (according to my Kiwi partner, who thought it was a Kiwi song). The sparer sound and ethereal vocals render it quite different – lighter and floatier – than the original, though perhaps this is closer to what Bush originally had in mind. Regardless, its a gorgeous rendition, and the Kiwi cover of a Canadian song makes for a pretty delightful cultural mash-up in my books.

Learn when you want

a blog about sustainability in practice

Reflections on Canadian Culture From Below the Border

The ultimate guide for independent travellers seeking inspiration, advice and adventures beyond their wildest dreams

O at the Edges

Musings on poetry, language, perception, numbers, food, and anything else that slips through the cracks.

Blogging about music from early 80s indie to Britpop and beyond

A site about Running, Health and Lifestyle

The Art and Craft of Blogging