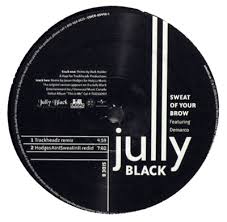 It’s been a while since we last looked at entries on The Huffington Posts’ list of 100 Best Canadian Songs Ever. Don’t worry, we’re still on it! At #93 we find Jully Black and DeMarco with “Sweat of Your Brow.”

I’ll be the first to raise my hand and admit that I know very little about rap, hip-hop, and to a large degree, modern R&B. It just doesn’t tend to float my boat. So, I’m probably not the most qualified to judge the merits of work in that genre, and what of that work should chart alongside the best in other types of song. I am aware, though, that Jully Black is celebrated for her work; she’s formidable, and admirable: A fantastic singer and presenter, a strong, positive woman, and a seemingly excellent ambassador for Canadian culture.

The youngest of seven children of an immigrant family from Jamaica, Jullyann Inderia Gordon was born and raised in Toronto. By the age of 21, her talent was recognized by the major labels, with Warner, then Universal, signing her in turn. She has since been frequently nominated for, and occasionally awarded, Juno Awards, and has collaborated with many well-regarded artists in the genre. She served as correspondent on a season of Canadian Idol, hosted the 2008 Canadian Radio Music Awards, and has appeared as a celebrity reporter for CTV’s etalk entertainment daily, amongst other notable appearances as presenter.

“Sweat of Your Brow” was the second single from Black’s 2005 debut record, This Is Me. It features a rap by DeMarco, and rose to #16 on the Canadian charts. It is alternately catchy, and alternately makes me feel like I should get up and do step aerobics. I commend its positive lyrics.

Black is great, and the song is catchy enough. But it should a piece built on collaboration by a non-Canadian chart on a Best Canadian songs chart? The talented DeMarco is Collin Edwards, a Jamaican reggae artist; meanwhile, the end of this track appears to sample the American group Reel 2 Real’s “I Like To Move It.” Sure, the song qualifies for the Canadian Radio and Television Commission’s Canadian content rules (yes, there are rules about such things). But if this is acceptable criteria, then I expect further entries on this chart to include the likes of Steppenwolf, the Lovin’ Spoonful, and the Blues Brothers, whose notable and enduring work also meets CanCon criteria because of prominent Canadian contribution as artists, writers, and producers.

It’s not to say Jully Black’s work shouldn’t be candidate for a Best Canadian Songs list, but could the authors of said list not have chose an piece that was distinctively her own? CBC Music chose her as one of “The 25 Greatest Canadian Singers Ever,” and fans and peers have dubbed her “Canada’s Queen of R&B.” It stands to reason that her solo work holds its own.

It’ll be interesting to see how this list continues to unfold.