We are just past half-way through our three-month stay in Glasgow, and I’m not gonna lie, the dreary, rainy weather is getting to me. We had a few glorious, heaven-sent days of sunshine last week and although I did a mad bit of weeding and even got something of a tan, my down jacket was never too far from hand. Good thing, as we’re back to rain and the single digits now.

Well, when in Glasgow, get your mojo back by making music, right? We’ve been on the search for a a used guitar, and although car shopping recently took precedence – it really is very little fun employing transit from out in the ‘burbs, especially in the pouring-down rain – we’ve managed to get to a few of the local music shops regardless. We especially enjoyed ducking into the west end’s CC Music, where the owner, Steve Caban, proved to be welcoming, helpful, and a helluva guitar player.

The friendly CC Music sign, beacon for musical talent from near and far.

CC Music sits below street level on Otago Street, near the University of Glasgow. Down the steps and through the door one is greeted first with walls full of gig notices and want ads. The main shop space is huge, brimming with myriad instruments and large enough to host live performances. Co-owner Jimmy Cannell (aka Jimmy Egypt), a respected guitar repairer with a client roster including Paul McCartney, The Fratellis, The Stone Roses, and Franz Ferdinand, has a repair shop on site. These guys know and love their craft, and it shows.

CC Music opened in it’s current space in 2008, but the original, smaller store was a kind of hub for the Glasgow scene including such bands as: 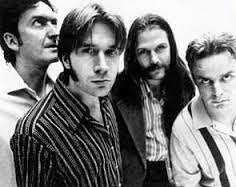 Justin Currie formed the Scottish rock band Del Amitri in 1983 after posting an ad that attracted Iain Harvie, Bryan Tolland, and Paul Tyagi, though Currie and Harvie, the main songwriters for the group, have alone been the constant. Active through 2002, and resuming again in 2013, the band has five Top 10 albums to its name in the UK, and cracked the Billboard Hot 100 in the US with “Roll To Me.”

Del Amitri quickly became popular on the local scene, attracting the attention of a BBC1 deejay who played the group’s demo on air. By 1984, the group was signed to Chrysalis Records, and released a self titled debut the following year. The album was a flop, and in 1986, Chrysalis released the band. They soldiered on, produced a new record, and by 1987 secured a contract with A&M. Despite a series of personnel changes while recording 1989’s Waking Hours, the album proved a breakthrough, featuring the single “Nothing Ever Happens.” They made headway in the US, performing on the David Letterman Show and at Woodstock ’94, but their success seemingly peaked in 1995 with the release of Twisted, which featured “Roll To Me.” Turnover in band members and flagging support from their label slowed their earlier momentum although they managed their third-biggest hit in 1998 with the official anthem for the Scottish World Cup squad, “Don’t Come Home Too Soon.”

A 2014 reunion tour was well received at home, with some 8,000 coming to see the band in their hometown, and the subsequent live album released later that year sold out on the day of its release.

This Glasgow soft rock band formed at Clydebank High School in 1982, as a mostly-covers band called “Vortex Motion” comprised of Marti Pellow, Tommy Cunningham, Graeme Clark, and Neil Mitchell. In 1983, Graeme Duffin joined as an unofficial member and Wet, Wet, Wet as we know them came into being.

I’ve written previously here about the sheer volume of rain in Scotland, and how it inevitably must influence local art. Funny that: Graeme Clark noted in a 1987 interview that, “At the time it was Duran Duran, Talk Talk – double-barrelled names; we just added on another to confuse people. And we would look outside and see the rain coming down. It did seem quite relevant to Glasgow.”

The band rehearsed and wrote for two years before gracing a stage, debuting professionally at a New Year’s Eve gig at Glasgow’s legendary Barrowland Ballroom. The band signed to PolyGram in 1985, and quickly began charting hits, although 1992 ‘s “Goodnight Girl,” is the only Number One in their repertoire which the band itself wrote.

In 1994 the group scored their biggest hit, a cover of The Troggs’ “Love Is All Around.” Featured in the Hugh Grant/Andie MacDowell film Four Weddings and a Funeral, the track enjoyed 15 weeks at the top of the UK charts. In 1997, the band released its seventh studio album, lost its drummer in a fight over royalties (having suddenly decided that he deserved a less than the up-to-then equal split), and saw Pellow depart in 1999 to attend to drug and alcohol addictions.

Pellow released a debut in 2001, the band gingerly reformed in 2004, and have performed and recorded occasionally ever since.

The classic Scottish New Wave band formed in 1977, with Jim Kerr and Charlie Buchell at the core. The two first joined a short-lived punk band on the south side of Glasgow called Johnny & The Self-Abusers, but that band soon split into factions, which resulted in one band called The Cuban Heels, and another, The Simple Minds.

With a name inspired from the lyrics of David Bowie’s “Jean Genie,” The Simple Minds regrouped, stabilizing its lineup the following year, and releasing Life In A Day in 1979. The title track was released as a single, and performed decently on the charts, but the follow-up flopped. Their next records took a darker, more atmospheric tone, placing the band at the forefront of the New Wave sound which would be their trademark.

The band’s success grew steadily over the early 80s, but not until the inclusion of “Don’t You Forget About Me” on The Breakfast Club soundtrack did they manage a US breakthrough. This, their only US Number One, had first been offered to Billy Idol and Bryan Ferry, both of whom declined it. Despite their success, the band was by this time run down. Membership began to churn, and the cohesion and sound necessarily evolved. Kerr and Buchell have managed to ride the upheavals, and continue to head the band today in both recording and performing live.

All that said, CC Music must’ve been a buzzing, vital place to be in the 80s. Entirely different bands with different sounds and different interests perhaps encountering each other in the guitar room, sharing ideas, and basking in the momentum that burgeoned in the scene at that time. It’s hard to know how it compares today, and maybe that’s not a fair question, but it is fun to imagine what the spirit of the place would have been like.

Meanwhile, our search for a good used guitar continues….

Learn when you want

a blog about sustainability in practice

Reflections on Canadian Culture From Below the Border

The ultimate guide for independent travellers seeking inspiration, advice and adventures beyond their wildest dreams

O at the Edges

Musings on poetry, language, perception, numbers, food, and anything else that slips through the cracks.

Blogging about music from early 80s indie to Britpop and beyond

A site about Running, Health and Lifestyle

The Art and Craft of Blogging